The hillside town of Rennes-le-Château is located in Languedoc, southern France (Figure 1). The town has played a key historical role, both as the center of the Cathar heresy in the region and its subsequent suppression, as well as in traditions connected to the Templar movement and its ultimate suppression (Baigent, Leigh and Lincoln, 1996). Surface findings around the hilltop and the church suggest the area has long historical past including pre-Christian pagan religious sites and as a provincial center in the Greco-Roman period. More recently, the town has been linked by conspiracy and historical enigma buffs with numerous legends including the location of the Holy Grail, the Ark of Noah, the Ark of the Covenant and the treasures of the Temple of Solomon (Baigent, Leigh and Lincoln, 1996). Such mysteries and speculations have baffled and stimulated researchers for hundreds of years.

To explore some of these theories, a preliminary ground penetrating radar (GPR) investigation was undertaken. GPR is geophysical technique that has received growing recognition in its ability to detect and map buried archaeological sites in a safe, quick, and non-destructive manner (Sternberg and McGill, 1995; Kvamme, 2001). The GPR technique, which is based on the propagation and reflection of pulsed high frequency electromagnetic (EM) energy, can provide near surface, high resolution (dm to m scale), near continuous profiles of a site. Two locations were chosen for the initial GPR project within the town of Rennes-le-Château: the Tour Magdala and the Church of St. Mary Magdalen (Figures 2 and 3). The former in particular was the initial goal, since information had been conveyed of family traditions connected to a burial of interesting items in the tower at the time of its construction (J. Genibrel, personal communication, 2001). The survey at the Tour Magdala was carried out to image any features that may be located beneath the tower floor or around its outer base (Figure 2). The survey at the Church was carried out to map any features that may be located beneath the church floor (Figure 3). The reason for this survey was that the mayor of the town, Jean Francois L’Huilier, had himself wished that just such a investigation be undertaken, as he was convinced there may be interesting items beneath the present floor of the church (which probably was not the original church floor).

The central aim of the paper is to present the preliminary GPR results from two sites within the community of Rennes-le-Château, France – Tour Magdala and the Church of St. Mary Magdalen. 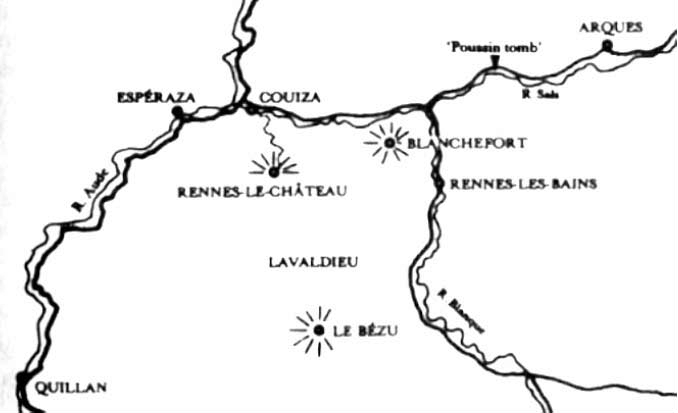 Figure 1: Map of Rennes-le-Cheateau and the surrounding area in southern France. 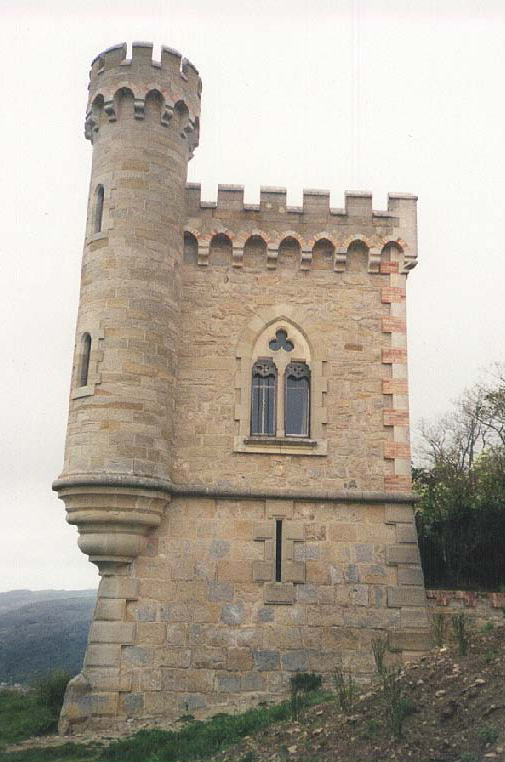 Fig. 1: Tour Magdala in Rennes-le-Chateau. GPR profiles were collected along the outer wall and within the cellar.

With the availability of portable, robust and digital radar systems, GPR provides a noninvasive geophysical procedure that allows one to investigate the subsurface. The technique can be used to find the exact positions of buried items without disturbing the material above. The data presented were collected using pulseEKKO 100 and 1000 GPR systems with various antennae frequencies (ranging from 200MHz, 450 MHz and 900 MHz) and 200/400 V transmitters. Step sizes ranged from 0.05 m, 0.025 m to 0.1 m. To reduce data collection time, a backpack transport system carried the computer, console and battery. GPR profiles were collected along a single line and 3-D cubes were assembled from a series of 2-D GPR profiles that were collected running parallel to each other along an x-y grid system. The 2-D GPR profiles were initially processed and then interpolated to create 3-D datasets. Visual rendering of the 3-D datasets was done using Fortner T3D. Near surface velocity measurements were calculated from common midpoint (CMP) surveys. The application of radar stratigraphic analysis on the collected data provided the framework to investigate both lateral and vertical geometry of the potentially buried archaeological features (Conyers and Goodman, 1997)

Figure 3: The Church of St. Mary Magdalen in Rennes-Le-Chateau.

The diagnostic GPR response to many buried items is a hyperbolic shape (inverted U) on the radar record. The top of the hyperbola and the shape of the tails aids in locating the subsurface feature. Of the lines collected in the project, a selection of preliminary results will be presented.

A GPR survey was conducted within and around Tour Magdala (Figure 2). The survey was carried out to image any features that may be located beneath the tower floor or around its base (outside). Both the west and north walls of the Tour Magdala were surveyed using 200 and 450 MHz antennae. Results indicate the tower is built on the local bedrock with possible surface and subsurface disruptions in the local stratigraphy. Data for 3-D cubes were acquired in the cellar of Tour Magdala. The GPR transects were collected using 450 and 900 MHz antennae with data points collected every 0.05 m and 0.025 m respectively. The dimension of the grids were (1) 3.7 m x 3.7 m (450 MHz; Figures 4 and 5), (2) 1.7 m x 1.7 m (450 MHz), and (3) 1.7 x 1.7 m (900 MHz). The GPR images show a hyperbolic feature that can be followed across several parallel lines, which may indicate the possibility of a buried feature (Figures 4 and 5).

A high resolution GPR survey was conducted within the Church of St. Mary Magdalen (Figure 3). The survey was carried out to image any features that may be located beneath the church floor. Within the Church, the data for 3-D cubes were acquired along portions of the lower and upper church floor. The GPR transects were collected using 200 and 450 (see Figure 1). The profile shows the local bedrock (horizontal) layering at approximately 1.1 m depth. Above the bedrock layering at position 2.3 m is hyperbolic feature (diffraction) that is prevalent for several GPR lines indicating a feature potentially different from surrounding materials. 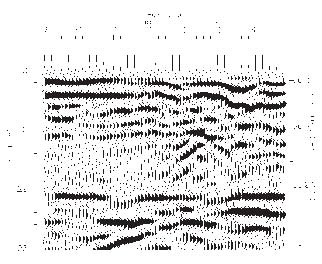 Figure 4: 450 MHz profile collected in the cellar/basement of Tour Magdala (see Figure 1). The profile shows the local bedrock (horizontal) layering at approximately 1.1 m depth. Above the bedrock layering at position 2.3 m is hyperbolic feature (diffraction) that is prevalent for several GPR lines indicating a feature potentially different from surrounding materials.

1. GPR datasets collected within and around the Tour Magdala revealed the subsurface structure along the base and within the cellar/basement of the tower. Results indicate a possible buried feature, which will require further work to identify.

2. GPR data were collected within the Church of St. Mary Magdalen, Rennes-Le-Chateau. France. The resulting GPR datasets reveal the internal structure of the church floor and a possible burial crypt(s), involving possibly one but probably at least two sepulchers. 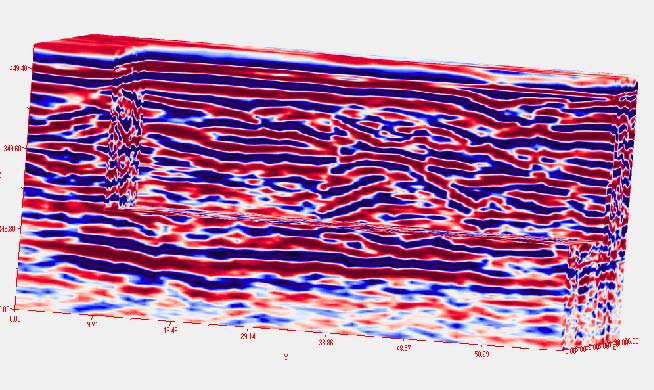 Fig. 5: Three-dimensional cube collected with 37 parallel 450 MHz GPR transects. The profiles were collected in the cellar/basement of Tour Magdala (see Figure 1). The 3D image shows the local bedrock layering above which a hyperbolic feature (diffraction). Through animation one can see the feature is prevalent for several GPR lines indicating an anomaly potentially different from surrounding materials.

4. Subsurface anomalies interpreted from the GPR data collected are potential archaeological sites that were previously unknown to investigators. Based on the non-invasive GPR results of the project, excavation permits are being requested from French authorities. 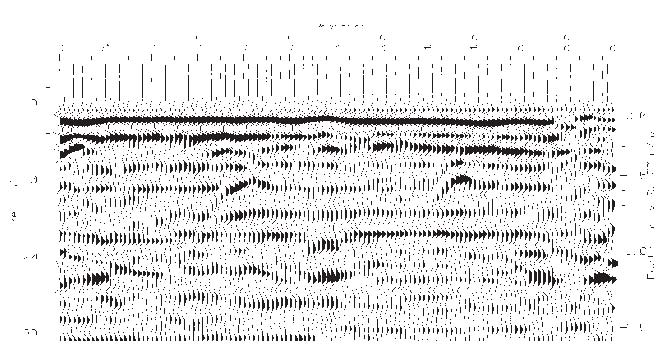 Fig. 6: 450 MHz profile collected perpendicular to Figure 1 (down the aisle) in the Church of St. Mary Magdalen (see Figure 3). The profile shows the subsurface layering of the church. At positions 2.15 and 4.35 m are hyperbolic features (diffractions) that was also visible in the perpendicular lines. These features could be burial crypt(s) below the surface of the church floor. 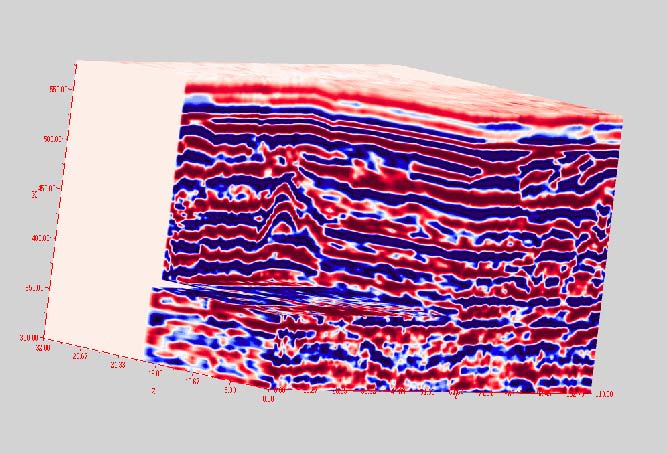 Figure 7: Three-dimensional cube of 40+ parallel 450 MHz GPR transects. The profiles were collected on the front (eastern) lower floor of the Church of St. Mary Magdalen (see Figure 3). The 3D image shows the subsurface view from the side of the church with a hyperbolic feature (diffraction) located in the center of the image. Through animation one can see that the feature is prevalent for several GPR lines indicated an anomaly that is potentially different from surrounding materials.

The expedition was sponsored by the John and Carol Merrill Foundation. Further research support was by the University of Wisconsin-Eau Claire (Office of University Research), and Sensors and Software. The following people are thanked for their guidance, support and camaraderie during the project: The Mayor of Rennes-Le-Chateau, The Hon. J.F. L’Huilier and the members of his office staff that made our expedition both possible and fruitful, Jean Genibrel and his daughter Brandie, Marinella Magri, Tuvia Fogel, and Serena Taje and her colleagues at Robadoba, Bologne.

Newly-discovered photographs of the Qumran excavations